The amazing aspect of stained glass is that it doesn’t come to life unless there is light that shines from behind… or within. Just like us.

Each of the following windows can be found at St. Andrew’s. There are more window spaces available for anyone who would like to donate and dedicate a stained glass window for a loved one.

Date: 1930
Received from Christ Church, Alameda where Henry Shires, Sr was Rector. After a fire in Christ Church, Rev. Shires salvaged the window and brought it to St. Andrew’s. 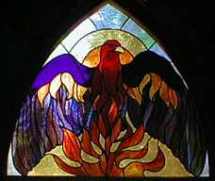 Date: 1975
Honor of: Father Joe Kennedy’s calling to St. Andrew’s
Given by: Bishop’s Committee of St. Andrew’s and friends
Artist: Janice Alldis
Significance: Symbol of resurrection (Phoenix rises out of it ashes of death and is reborn again) – Father Kennedy revitalized St. Andrew’s.

Date: 1980
Memorial: Walters Beers
Given by: wife, Mary Beers of Scotts Valley
Artist: unknown
Significance: Scenes of our local area. Purple mountain is a sign of the Masons. Besides being a Mason, Walter was active in the Parish and gave speeches integrating religion with his work as a Highway Patrolman. 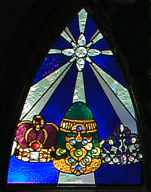 Date: 1980
Honor of: Marriage
Given by: Craig and Leslie Robinson of Ben Lomond in thanksgiving for their marriage which was during the Epiphany season.
Artist: Janice Alldis
Significance: Epiphany – Manifestation of Christ to the Gentiles in the person of the Magi

Date: 1990
Memorial: John Shaw
Given by: Helen Shaw (wife), John Shaw (son), and Diane Dearinger (daughter) of Felton
Artist: Virginia Fordice
Significance: John sang in Episcopal choirs and played organ. Our faith is the compass of life (he was an engineer). The altar is the church’s anchor (he was a boatman). Green diamond with a pitcher’s mound commemorates his baseball pitching days.

Date: 1984
Memorial: Ray Volpe
Given by: wife, Dorothy Volpe of Felton
Artist: Virginia Fordice
Significance: Congregational unity just as the pomegranate has many seeds in one piece of fruit. Symbol stands for fertility, hope of immortality, and resurrection. 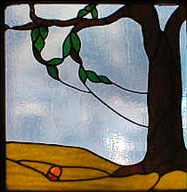 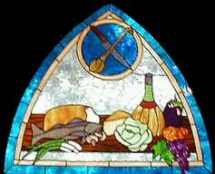 Date: 1980
Honor of: The Women of St. Andrew’s
Given by: St. Andrew’s Guild and donations
Artist: unknown
Significance: From 1974 to 1980 the Women’s Guild put on many lunches and dinners. Martha did a lot of cooking in the Bible.

Date: 1981
Memorial: Rev. Dr. Henry Shires, Jr.
Given by: wife, Lois Shires Curtis and family of Los Altos
Artist: Gary Rominger
Significance: Crown of Glory is the reward to the faithful in the life after death to those who believe in the Crucified Savior.

Date: 1991
Memorial: Bill and Mary Wheeler
Given by: Rick and Cindy Garay of Brookdale and Mary Kester of Santa Cruz
Artist: Virginia Fordice
Significance: Virgin Mary, Lord’s Last Supper and purification of baptism. Garay’s and Wheeler’s shared many meals together and a special friendship.

Date: 1980
Memorial: Theodore Inness and Dora Meith
Given by: son, Stan and Elanor Meith of Santa Cruz
Artist: Virginia Fordice
Significance:  Stigmata of Christ are the marks resembling the five points of the star on the sand dollar. Sea and seaweed appear in the background. 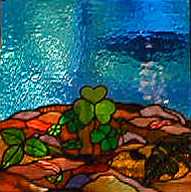 Date: 1992
Memorial: Vera Wilder
Given by: Bev Wilder of Ben Lomond
Artist: unknown
Significance: Spirit waters the seed of life to grow within the garden of creation. 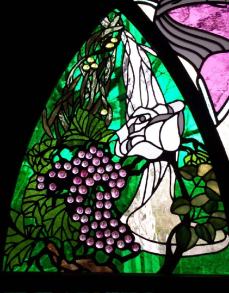 Date: 2019
Memorial: Moe and Rose Garay; Bob and Mickey Browne
Given by: Rick and Cindy Garay
Artist: Virginia Fordice
Built by: Bobbie Faulk
Installed by: Jerry Faulk
Significance: The religious symbols in the window are the white rose, symbolizing the Virgin Mary; grapes and grape leaves representing Christ and Christian faith (the miracle of turning water into wine); the olive branch representing peace and the earth coming back to life after the great flood; and the waterfall representing the Holy Spirit, cleansing and salvation. (John 7:38 – “Whoever believes in me, as the Scripture has said, streams of living water will flow from within him.”)

These symbols and their meanings describe our parents and their relationships with each other and their faith. They genuinely liked each other and became friends who got together even without Rick and I. They lived close together and often had each other over for dinner. The grapes and the olives symbolize sharing food and wine and that was always a big part of any get-together. Our dads loved to go fishing together and they both enjoyed growing vegetables. The waterfall and olives symbolize those two things. The rose is for both our moms, as it was Mickey’s middle name and Rose’s name. All of our parents believed in God and practiced their faith in different ways and they all loved coming to St. Andrew’s and worshiping in our beautiful little church.

Here is the history on how the St. Francis statue in the sanctuary came to us and the significance of this beautiful statue. Thank you Janet Butler for investigating the story and submitting the photographs. The following was submitted by Claudia Ward.

In June of 1984, my youngest sister, Jennifer Laura Berlanga, married Arnaldo Castellucci in Florence, Italy. I took my two daughters, Katie, who turned 9 the day of the wedding, and Amelia, 7, to the wedding. It was a northern Italian wedding, quite sedate, nothing like the ones you see on TV. The impressive thing was that during the ceremony, as matron of honor, I signed as a witness in the parish register which went back hundreds of years. It was a mighty thick volume.

One of the things I really wanted to do while in Italy was to go to Assisi, (pronounced uh see zee). We visited the Church of San Francesco at one end of the village (located on top of a mesa-like hill) and the Church of Santa Chiara (St. Clare) at the other end of town. My seven year old daughter and I descended to the crypt to see St. Clare, not really expecting to see St. Clare, but indeed we did, in the flesh, dark desiccated flesh. We didn’t stay long. (When I went back years later, the entire crypt area was redone tastefully and although Clare is still lounging in state, her face is covered with a mask.)

My other sister, Ramona Ray, had recently lost her five year old daughter in a car accident near Felton. They were coming back from a day at the beach when a car from the other direction made a careless left hand turn and collided with my sister. Andrea Beth Burgdorf died in the hospital. We had talked about some sort of memorial in her name, but hadn’t decided what to do yet. Then, while walking the streets of Assisi, we passed a wood carving business with some very nice statues of St. Francis. We decided that would be the perfect gift for St. Andrew’s where Ramona attended church. The package was wrapped up tightly with padding and resembled a small mummy.

It was a bit of a challenge travelling internationally, with all the plane changes, to lug Francis around. But the girls took turns carrying the heavy, bulky package as we ran to catch our various flights, managing not to drop him. After getting the wood treated and a plaque made, we, the Ward Family, presented the statue of St. Francis of Assisi, to St. Andrew’s Episcopal Parish as a memorial to Andrea Beth Burgdorf, 3 August 1978 to 27 Sept 1983, 5 years old. The statue was a gift of Claudia and Rusty Ward and their daughters, Katherine Ward and Amelia Ward.